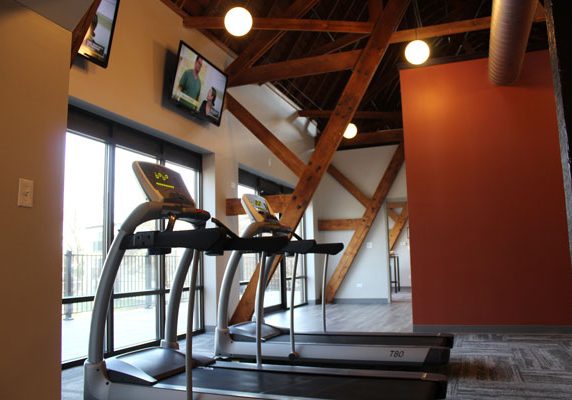 The existing building was a wood framed, two-story dairy barn that was recently used as a community center meeting room and business office for Axiom Properties.  The first floor is 2,500 SF and contains a clear interior height of nearly 28′-0″; it was completely remodeled including new flooring, partition walls, perimeter insulation, lighting and modifications to the existing mechanical systems.  The project consisted of adding two new ADA toilet rooms, managerial offices, community business office, small fitness center and a coffee bar.  In order to serve the public, an accessible ramp was added to the outside of the building as well as an accessible walk to gain entry to the building. Since a majority of the windows are located on the east façade, we wanted to dedicate half of these windows to the offices and use the remainder of the windows to bring in natural daylight for the rest of the interior spaces where windows were scarce.  Any partition wall located in the open two-story space stopped at 10’-0” which allowed light to reflect and filter throughout. We specified an oversized ceiling fan to increase airflow throughout the building, which allowed us to reuse the smaller existing furnaces and condensing unit. Since the perimeter walls were not insulated, we had to furr-out all exterior walls and install insulation up to the start of the sloping roof.  The roof did contain rigid insulation, thus the building was finally brought up to meet the new energy conservation code.